Use Case: An Advanced Elasticsearch Architecture for High-volume Reindexing

I’ve found a new and funny way to play with Elasticsearch to reindex a production cluster without disturbing our clients. If you haven’t already, you might enjoy what we did last summer reindexing 36 billion documents in 5 days within the same cluster.

Reindexing that cluster was easy because it was not on production yet. Reindexing a whole cluster where regular clients expect to get their data in real time offers new challenges and more problems to solve.

As you can see on the screenshot below, our main bottleneck the first time we reindexed Blackhole, the well named, was the CPU. Having the whole cluster at 100% and a load of 20 is not an option, so we need to find a workaround. 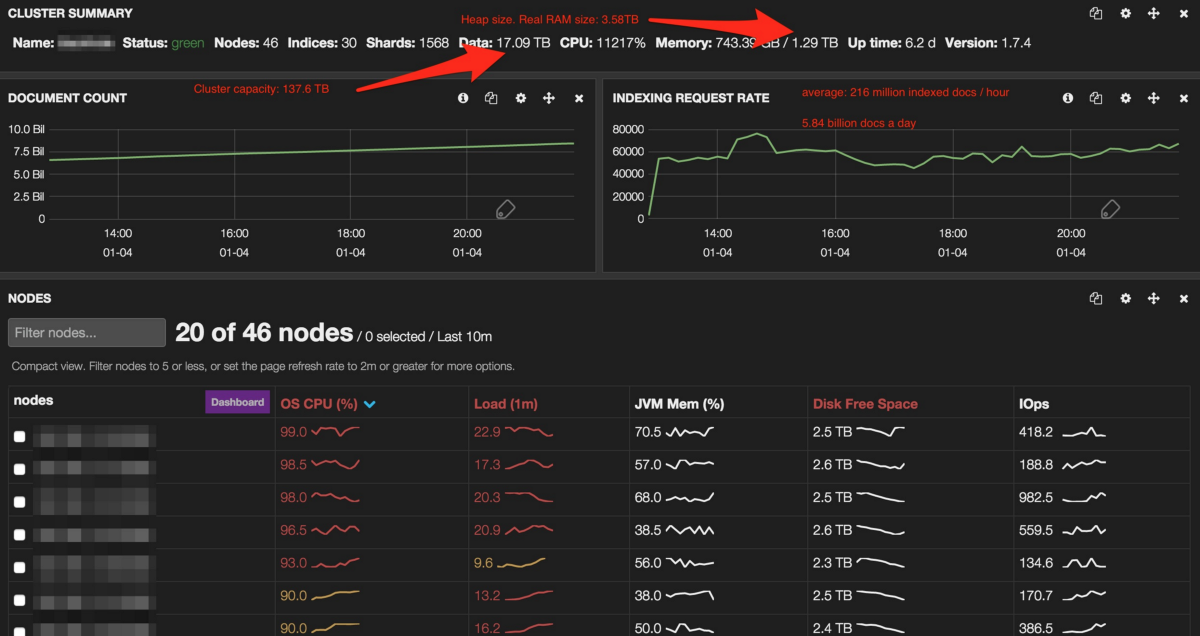 This time, we won’t reindex Blackhole but Blink. Blink stores the data we display in our clients dashboards. We need to reindex them every time we change the mapping to enrich that data and add new feature our clients and colleagues love.

A glimpse at our infrastructure

Blink is a group of 3 clusters built around 27 physical hosts each, having 64GB RAM and 4 core / 8 thread Xeon D-1520’s. They are small, affordable and disposable hosts. The topology is the same for each cluster:

The data nodes have 4*800GB SSD drives in RAID0, about 58TB per cluster. The data and nodes are configured with Elasticsearch zones awareness. With 1 replica for each index, that makes sure we have 100% of the data in each data center so we’re crash proof.

We didn’t allocate the http query nodes to a specific zone for a reason: we want to use the whole cluster when possible, at the cost of 1.2ms of network latency. From Elasticsearch documentation:

When executing search or GET requests, with shard awareness enabled, Elasticsearch will prefer using local shards – shards in the same awareness group – to execute the request. This is usually faster than crossing racks or awareness zones.

In front of the clusters, we have a layer 7 load balancer made of 2 servers each running Haproxy and holding various virtual IP addresses (VIP). A keepalived ensures the active load balancer hold’s the VIP. Each load balancer runs in a different data center for fault tolerance. Haproxy uses the allbackups configuration directive so we access the query nodes in the second data center only when the two first ones are down.

So our infrastructure diagram becomes:

In front of the Haproxy, we have an applicative layer called Baldur. Baldur was developed by my colleague Nicolas Bazire to handle multiple versions of a same Elasticsearch index and route queries amongst multiple clusters.

There’s a reason why we had to split the infrastructure in multiple clusters even though they all run the same version of Elasticsearch, the same plugins, and they do exactly the same things. Each cluster supports about 10,000 indices, and 30,000 shards. That’s a lot, and Elasticsearch master nodes have a hard time dealing with so many indexes and shards.

Baldur is both an API and an applicative load balancer built on Nginx with the LUA plugin. It connects to a MySQL database and has a local memcache based cache. Baldur was built for 2 reasons:

to tell our API the active index for a dashboard

to tell our indexers which indexes they should write in, since we manage multiple versions of the same index.

In elasticsearch, each index has a defined naming: <mapping version>_<dashboard id>

In baldur, we use have 2 tables:

The first one is the indexes table with the triplet

That’s how we manage to index into multiple versions of the same index with the ongoing data during the migration process from one mapping to another.

The second table is the reports table with the triplet

So the API knows which index it should use as active.

Just like the load balancers, Baldur holds a VIP managed by another Keepalived, for fail over.

Using Elasticsearch for fun and profit

Since you know everything you need about our infrastructure, let’s talk about playing with our Elasticsearch cluster the smart way for fun and, indeed, profit.

Elasticsearch and our indexes naming allows us to be lazy so we can watch more cute kitten videos on Youtube. To create an index with the right mapping and settings, we use Elasticsearch templates and auto create index patterns.

Every node in the cluster has the following configuration:

And we create a template in Elasticsearch for every mapping we need.

Every time the indexer tries to write into a not yet existing index, Elasticsearch creates it with the right mapping. That’s the magic.

Except this time, we don’t want to create empty indexes with a single shard as we’re going to copy existing data.

After playing with Elasticsearch for years, we’ve noticed that the best size / shard was about 10GB. This allows faster reallocation and recovery at a cost of more Lucene segments during heavy writing and more frequent optimization.

Before reindexing a client, we run a small script to create the new indexes with the right amount of shards. Here’s a simplified version without error management for your eyes only.

What we’re going to do is to leverage Elasticsearch zone awareness to dedicate a few data nodes to the writing process. You can also add some new nodes if you can’t afford removing a few from your existing cluster, it works exactly the same way.

First, let’s kick out all the indexes from those nodes.

Elasticsearch then moves all the data from these nodes to the remaining ones. You can also shutdown those nodes and wait for the indexes to recover but you might lose data.

Then, for each node, we edit Elasticsearch configuration to assign these nodes to a new zone called envrack (fucked up in French). We put all these machines in the secondary data center to use the spare http query nodes for the indexing process.

Then restart Elasticsearch so it runs with the new configuration.

We don’t want Elasticsearch to allocate the existing indexes to the new zone when we bring back these nodes online, so we update these index settings accordingly.

The same way, we don’t want the new indexes to be allocated to the production zones, so we update the creation script.

More readable than a oneliner isn’t it?

We don’t add a replica for 2 reasons:

Indeed, losing a data node means losing data. If you can’t afford reindexing an index multiple times in case of a crash, don’t do this and add another zone or allow your new indexes to use the data from the existing zone in the backup data center.

There’s one more thing we want to do before we start indexing.

Since we’ve set the new zone in the secondary data center, we update the http query nodes configuration to make them zone aware so they read the local shards in priority. We do the same with the active nodes so they read their zone first. That way, we can query the passive http query nodes when reading during the reindexing process with little hassle on what the clients access.

In the main data center:

And in the secondary:

We first tried to reindex taking the data from our database clusters, but it put them on their knees. We have large databases and our dashboard are made of documents crawled over time, which means large queries on a huge dataset, with random accesses only. In one word: sluggish.

What we’re doing then is copy the existing data, from the old indexes to the new ones, then add the stuff that makes our data richer.

To copy the content of an existing index into a new one, Logstash from Elastic is a convenient tool. It takes the data from a source, transforms it if needed and pushes it into a destination.

Our Logstash configuration are pretty straightforward:

We can now run Logstash from a host inside the secondary data center.

Once we’ve done with reindexing a client, we update Baldur to change the active indexes for that client. Then, we add a replica and move the freshly baked indexes inside the production zones.

Now, we’re ready to delete the old indexes for that client.

This post doesn’t deal with cluster optimization for massive indexing on purpose. The Web is full of articles on that topic so I decided it didn’t need another one.

What I wanted to show is how we managed to isolate the data within the same cluster so we didn’t disturb our clients. Considering our current infrastructure, building 3 more clusters might have been easier, but it has a double cost we didn’t want to pay.

First, it means doubling the infrastructure, so buying even more servers you won’t use anymore after the reindexing process. And it means buying these servers 1 or 2 months upfront to make sure they’re delivered in time.

I hope you enjoyed reading that post as much as I enjoyed sharing my experience on the topic. If you did, please share it around you, it might be helpful to someone!